Together, the Ravenswood Community Council, Greater Ravenswood Chamber of Commerce, and SSA #31 have brought a variety of permanent and temporary works of public art to to our neighborhood. Projects funded, organized, or supported by our organizations include murals, sculptures, textile installations, community landmarks, mosaics, and other creative works.

For over a century, the Ravenswood Industrial Corridor has been home to one of Chicago’s most vibrant and diverse creative communities. Over that time, makers of all kinds- from metalworkers and brewers to painters and carpenters- have laid down roots in Ravenswood. Historic manufacturing centers that once housed giants of industry have been reimagined, each now home to countless talented artisans.

Established in 2021 by the Ravenswood Community Council (RCC) and Greater Ravenswood Chamber of Commerce (GRCC), the Ravenswood Sculpture Garden celebrates this rich history of arts and industry. Chicago’s newest public art destination debuted with six sculptures, including four works commissioned for this project. Three more pieces are scheduled for installation in the spring of 2022. This new attraction enhances Ravenswood’s standing as a destination neighborhood, paying homage to its creative spirit while driving traffic to area small businesses.

On View: Public Art in Ravenswood

Flight of the Honey Bee

Created by: Ross and Elizabeth Fiersten (Manifold)
Sculpture
Located at Ravenswood and Montrose

Created by: Margaret Lanterman
Sculpture
Located at Ravenswood Ave just north of Berteau Ave, west side of the tracks

Created by: Jim Gallucci
Sculpture
Located at Ravenswood and Berteau

Created by: Brandin Hurley
Sculpture
Located at Ravenswood and Leland

Created by: Will Vannerson
Sculpture
Located at Ravenswood and Lawrence

The Greater Ravenswood Chamber of Commerce and Ravenswood Community Council are dedicated to supporting local artists and increasing opportunities for artists in our community. If you’re considering a public art project in our neighborhood, we’re here to help! Contact GRCC Associate Director Gene Wagendorf III to talk about your project.

We received an impressive amount of entries for consideration for a proposed Ravenswood Sculpture Garden! The GRCC deeply thanks all the artists who submitted their work for consideration. The list of entries was carefully curated and has been narrowed down to the final sculpture selections.

Work on this project began in 2019, following the closure of the Ravenswood Corridor TIF district by Chicago’s City Council. Unallocated funds from the terminated district were earmarked for several projects, including the seeding of the Ravenswood Sculpture Garden and the creation of several “People Spaces” around the neighborhood. Additional funds were contributed by the RCC and GRCC, who issued a public Request for Proposals for sculptures in early 2020. Over 60 proposals were submitted by artists from across the world. A community survey and feedback process whittled the list down, and final selections were made by a panel of arts professionals and local business owners.

Get Ravenswood News and Updates in your Inbox 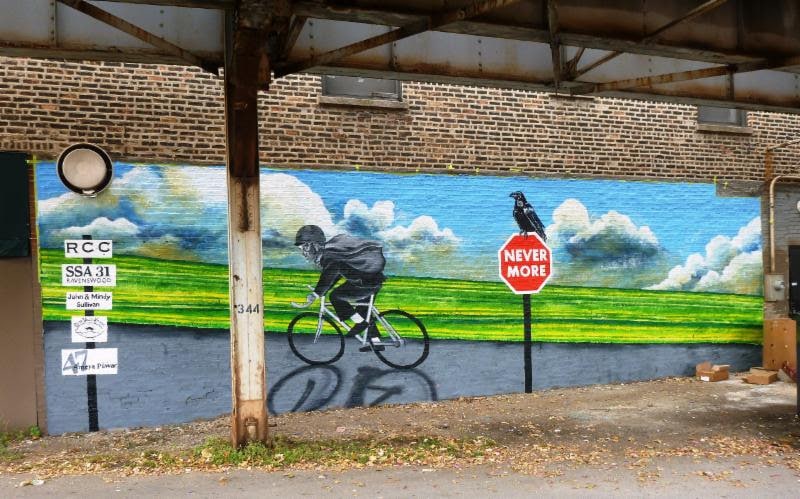 Are you a property owner interested in installing public art or murals on a blank wall? Please complete our interest form for property owners here. If you have any questions, feel free to reach out to GRCC Associate Director Gene Wagendorf III using the link below.